A fragment of late 13th century carved stone, now much worn through exposure to the elements, has been on display in the grounds of Lincoln Castle since at least 1906, but in all probability, it was placed there some years earlier, perhaps even in the 1870s. The Lincoln Castle Guide Book, printed by Morton in 1906, referred to this fragment – the first of the Eleanor Crosses being on display in the entrance gateway of the Castle.  It is a Grade II listed monument.

The fragment of the Eleanor Cross in Lincoln Castle. (photo: April 2013)

The “Eleanor Crosses” were erected by King Edward I as elaborate monuments in memory of his wife, Eleanor of Castile. After her death at Harby, near Lincoln, in 1290, the King arranged for memorials to be erected at the 12 places where her body rested on its journey to Westminster Abbey. Lincoln was, therefore, the first resting place.

Over the centuries, most of the monuments have deteriorated one way or another and could have been vandalised in the time of the English Civil War. The best preserved cross is at Geddington in Northamptonshire. 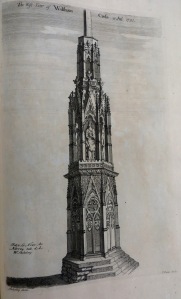 There is a reference to the location of the cross, when it still stood in Lincoln, in John Leland’s Itinerary of 1535-1543:

“There lay a suburbe also without the Barre gate, by southe of the toune, and streachid toward a village caullid Brasebridg, [a litle] without Barre is a very fair [crosse] and large, and S. Catarines st[andeth in] this suburbe on the sou[thwest] side of [Barre gate.]”

An order of the City in about 1624 referred to the site for the Eleanor Cross when it stated: “Ordered the Queen’s Cross without Barr Gates to be repaired”.

However, William Marrat’s map of Lincoln, published in 1817 and corrected in 1848, shows the site of the Eleanor Cross at the junction of the Roman roads, the Fosse Way and Ermine Street, now known as Newark Road and Cross o’Cliffe Hill. The location is shown as “Swine Green”.

The name, Cross o’Cliffe, is not derived from the Eleanor Cross. The “cross” in the road name refers to a cross at the top of the hill (on the cliff) which was replaced with a stone in 1600 to mark the boundary between Bracebridge and the City. When royalty or other dignitaries visited the city from London, they would be met by the sheriff (a county official) at the boundary stone at the top of Cross o’Cliffe Hill, as this was the county boundary with the city of Lincoln. The mayor would have represented the city of Lincoln within the Lincoln boundary.

The location marked the start of the journey opposite the Gilbertine Priory of St Catherine and at the point where the funeral cortège would have taken a last look at Lincoln Cathedral and the Castle on the hill and turned away from the city on to the old Roman road, Ermine Street, towards Grantham. It appears that the memorials sites were selected on main roads and at junctions where travellers and pilgrims would have passed by. They would, therefore, have been encouraged to pray for the soul of Queen Eleanor.

So, Lincoln’s Eleanor Cross lay broken and forgotten for several hundred years until, in 1863, it was noted in Tracts and miscellanies … that E J Willson (1787-1854), architect, antiquary, county surveyor and mayor of Lincoln, had identified “a mutilated female figure which had lain as a footbridge over a neighbouring ditch” as a fragment from the cross. “Mr Burton of this city (a gentleman who has occasionally done good service to local archaeology) has now the fragment in his grounds.”

The “Mr Burton” was, in all probability, Frederick Burton  (1798-1874), a Lincoln solicitor and the Clerk to the Gaol Sessions  which held its meetings in Lincoln Castle. Frederick Burton lived at Lindum House, not far from Lincoln Cathedral, and his house did, in fact, boast large grounds. The 1861 census for Lincoln does not show any other gentlemen of the appropriate status by the name of Burton. Frederick Burton would have known E J Willson well and indeed, he was known for his interest in historical matters on the evidence of two surviving letters he wrote to Mr T J Dixon of Holton, near Caistor in 1861 in relation to heraldry. (Lincolnshire Archives ref, 3 DIXON 5/11/22.23)

It is likely, perhaps, that the fragment of stone was removed to Lincoln Castle at any time after Frederick Burton’s death in December 1874. Although Lincoln Castle enclosed a secure prison in its grounds, the open space and county hall/assize building gave access to the public for local political interest events. The new Lincoln Prison on Greetwell Road (now HMP Lincoln) opened for local prisoners in 1872 and by 1884, the Castle was opened to visitors which would have made the site quite suitable for the display of the historical stone fragment.

The stone has, therefore, been in an outdoor and fairly public position almost continuously since it  was originally erected in 1290-92. The Lincoln fragment is only a section of the skirt of one of effigies of Eleanor, which looked down from the memorial.

The decline in Queen Eleanor’s health seems to have begun from at least 1285. Accounts in 1285 show expenditure on her medicines and a candle her own height burnt as an offering for her recovery. In 1287, Eleanor was ill with what was recorded as a “double quartan fever” which is a type of malaria.

In May 1286 Eleanor accompanied Edward to Aquitaine and they did not return to England until August 1289.

They spent May, June and most of July 1290 at Westminster and then moved to Northampton Castle. They moved on to Geddington Palace, Newstead Abbey and then Clipstone Hunting Lodge in Sherwood Forest where the Michaelmas Parliament was held.

The last writ issued by Edward at Clipstone was on 13 November. The next writs were given in Nottinghamshire – at Rufford (14 November), Laxton (16 & 17 November), Marnham (17 November) and Harby (20, 22, 25, 27 & 28 November). The line of the route implies that they were heading for Lincoln. However, the slow progress was no doubt attributable to Eleanor’s worsening health. She rested finally at the manor house of Richard de Weston in Harby a few miles west of Lincoln. Edward was with her when she died.

Eleanor’s financial accounts suggest that she had been in need of medicines for several months. In April, for example, a special silver vessel was purchased for the Queen’s syrups which were possibly required to alleviate a sickness affecting her lungs. Accounts of 18 October also list syrups brought from Lincoln.

Even more compelling evidence that the severity of Eleanor’s illness was feared as early as February 1290 lies in the payment to William de Farendon for images “made during the Queen’s illness”. She also paid the Black Friars in London £100 to prepare a chapel to receive her heart.

Three tombs were made for Eleanor’s remains. A tomb was made for her viscera within the Angel Choir in Lincoln Cathedral. Her heart was placed in a tomb at Black Friars, London. Her skeletal remains were buried in the tomb in Westminster Abbey.

Eleanor’s tomb holding her viscera in Lincoln Cathedral was destroyed by Parliamentarian soldiers in 1644. It was replaced in 1892 by a replica based on drawings of the original by the heraldic draughtsman William Sedgewick for Sir William Dugdale’s Book of Monuments in 1641 and the tomb in Westminster Abbey. Joseph Ruston of Monk’s Manor, Lincoln, sponsored the new tomb which was unveiled at a special service.

The making of Lincoln’s “Eleanor Cross”  The first payment for making the Lincoln cross is shown in the accounts of the Queen’s executors at the end of 1290 and the last payment in the autumn of 1292. The stone mason or “cementarius”, was Richard of Stow who received four payments of £20 each, one payment of 20 marks and two of two marks. The total was therefore £103.13s.4d. Robert of Corfe was paid for the rods, rings and hoods for the crosses at Waltham, Northampton and Lincoln. William de Hiberna was contracted to make and carry rods, hoods and rings for the Lincolnshire cross in 1292 at a cost of 22 marks.

The tombstone of stonemason, Richard of Gainsborough or Stow, “olim cementarius” is in the cloisters of Lincoln Cathedral and is dated to c 1340. As well as one of the sculptors of the Eleanor Crosses, he was contracted by the Dean & Chapter in 1306 to attend to and employ other masons for the new work in the east end and upper parts of the great transepts of Lincoln Cathedral. Nicholas Dymenge, a co-contractor for the Waltham cross, was also engaged at Lincoln Cathedral in 1293 on Queen Eleanor’s tomb. He seems to have worked closely with the sculptor Alexander of Abingdon. It can only be assumed that the three men worked closely together.

The tombs and memorials to Eleanor were exceptional demonstrations of Edward’s devotion to his wife’s memory. He desired that his subjects share in praying for her soul. For example there is a record that on 4 January 1291, six weeks after Eleanor’s death, Edward asked the Abbot of Cluny in France to cause masses to be sung for the soul of Eleanor.

The other Eleanor Crosses   The stopping places on the journey were: Lincoln, Grantham, Stamford, Geddington, Northampton (Hardingstone), Stony Stratford, Woburn, Dunstable, St Albans, Waltham, West Cheap in the City of London and the royal mews at Charing. Three of the crosses survive, at Waltham, Hardingstone and Geddington. The only three crosses still standing are those at Geddington, Hardingstone, and Waltham Cross.

For an update on the location of the Lincoln Eleanor Cross, see my post  – The Eleanor Cross at Lincoln Part 2 (1 June 2015)

The date book for Lincoln and neighbourhood from the earliest times to the present , printed and published RE Leary, [1866]

John Carmi Parsons, Eleanor [Eleanor of Castile] (1241–1290), queen of England, consort of Edward I in Oxford Dictionary of National Biography

4 thoughts on “The Eleanor Cross at Lincoln”

This site uses Akismet to reduce spam. Learn how your comment data is processed.